Questions about a band who is vastly underrated.

Quiz Answer Key and Fun Facts
1. Who was the lead singer for the band Queen, until 1991?

One of the greatest voices and showmen ever in the rock world.
2. Dwight Yoakam did a cover of which Queen song?

Very good remake with a country twang to it.
3. Which is the first song that John Deacon wrote that appeared on an album?

From the album "Sheer Heart Attack".
4. Who wrote the song "Keep Yourself Alive"?

The first song released from their debut album.
5. Who is the guitarist for the band?

One of his favorite guitars is one he built with his Dad when he was 13. He carries it with him and buys it its own seat when he travels on an airplane.
6. "Bohemian Rhapsody" was from which album?


Answer: A Night At The Opera

Written by Freddie Mercury and reached #1 on the charts again after it was featured on "Wayne's World".
7. Brian May and Roger Taylor were in a group called...?

After Smile broke up, Freddie joined them. A little later John Deacon joined and the band was called Queen.
8. Who played bass for Queen?

He wrote one of their most popular songs "Another One Bites the Dust".
9. What was Freddie's real name before he changed it to Mercury?

Tim Staffell was with Brian and Roger in Smile. He introduced them to Freddie.
10. Which member of Queen was in the band Wreckage?

He quit to join Brian and Roger to form Queen.
11. Who plays drums for Queen?

I am a drummer (percussionist as we like to be called) and he is one of my favorites.
12. The first movie Queen did the soundtrack for was "Flash Gordon".

Only two of the songs have any lyrics.
13. What year did Freddie Mercury pass away?

On November 23rd, Freddie announced to the world that he had AIDS. Just the next day, his fight was over, and he died peacefully at his home surrounded by friends and family.
14. Who did vocals on "Under Pressure" with Freddie Mercury?

Awesome song with two incredible voices.
15. How many different songs did Queen have that hit #1 on the UK charts before Freddie died? (Queen as a band - Freddie, Brian, John and Roger - and not solo stuff.) 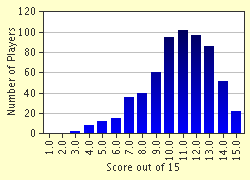 Related Quizzes
1. By Queen - or One of Its Members Average
2. Song by Song: "Bohemian Rhapsody" Average
3. Mercury, May, Deacon, or Taylor: Songs Of Queen Easier
4. Queen, Over Easy Easier
5. The Most Underrated Queen Song Ever Average
6. (The) Queen and I Average
7. Intense Killer Queen Tough
8. Bo-Rap, the One and Only Average
9. Queen: Who Wrote What Song? Tough
10. Queen Average
11. Queen - The Challenge Round, Part II Difficult
12. Queen Knowledge Tough


Other Destinations
Explore Other Quizzes by slowglass