The Tudor Dynasty. The very famous family that helped to develop England from a somewhat backward medieval land into a powerful Renaissance state.

Quiz Answer Key and Fun Facts
1. When was the Tudor Dynasty on the throne?

King Henry VII succeeded to the throne in 1485 after winning the Battle of Bosworth, and the Tudor dynasty ended with Henry's grand-daughter, Elizabeth I who died at the grand old age of 70 after reigning for 44 years.
2. Who was King Henry VII's first child?

Prince Arthur, 1486-1502, was the Prince of Wales. He was engaged at two and wedded the Spanish Princess Catherine of Aragon, before dying of a fever. His brother later married her. In order to do this, they needed a dispensation (special permission) from the Pope as marriage with the sibling of a deceased spouse is normally contrary to Church law.
3. Henry VII had seven children. Three became Kings or Queens. Which one listed here did not?

Henry later became King Henry VIII of England. Mary's marriage to Louis XII made her Queen of France and Margaret married the Scottish King, James IV.
4. King Henry VII was the King of England. What other title did he hold?

There is no such thing as either the Protector of Wales or Ruler of the English. The title Lord of Ireland was abolished by the parliament of Ireland in 1542; and Henry VII became the first King of Ireland.
5. Why did the Pope bestow the title Defender of Faith on King Henry VIII?


Answer: He wrote a book against the Protestant Reformation

Henry continued to use it after he broke away from the Roman Church. The title is still used by Elizabeth II.
6. What was Henry VIII's waist measurement when he died?

Henry died fat and happy with a huge waist. He was buried at Windsor Castle in Saint George's Chapel.
7. How many times was Catherine of Aragon pregnant?

Henry had six children by Catherine of Aragon - two girls, three boys, and one whose sex is unrecorded. And if you know your British Royalty, you'll know that the only one that survived was Mary.
8. Henry VIII had Anne Boleyn charged with witchcraft and adultery. Which one of these men was Anne supposed to have had an affair with?

All the incorrect names are made up! Mark Smeaton was convicted of having an affair with Anne and was sentenced to death. Four other men were also convicted and one was George Boleyn, Anne's brother.
9. On what day did Jane Seymour die?

She died from a fever a few days after seeing her own son's christening. Jane was considered by Henry as his 'true wife'. After his died he was buried next to her.
10. Anne of Cleves was the daughter of which Duke of Cleves?

The full name of the duchy was Jülich-Kleve-Berg, a state in the Holy Roman Empire.
11. What, according to tradition, were Catherine Howard's last words?


Answer: I die a Queen, but I would rather have died the wife of Culpepper

Catherine had been a lady in waiting to Henry's previous wife, Anne of Cleves. Many historians believe that these scandalous 'last words' were a hostile joke invented by others.
12. After Henry VIII's death, whom did Catherine Parr marry?

Lord Borough and John Neville were her marriages BEFORE Henry and John Locust was a gentlemen who rediscovered her coffin, body and flesh still intact in 1782. A drunk uncovered her grave about a decade later and buried her coffin upsidedown.
13. King Edward VI was a sickly child. At what age did he suffer his first illness, quartan fever?

Strangely, Edward's journal never showed much sickness except for measles in 1552 and the tuberculosis which killed him in 1553.
14. Mary I started a five-year period called the "Marian Persecutions". During this period Mary I ordered the deaths of hundreds for being "heretics". About how many people died?

Mary I was the daugther of Catherine of Aragon. Henry VIII had divorced Mary's mother and demoted her to Dowager Princess and in turn declared Mary illegitimate (for succesion to the throne). In 1553, her brother, King Edward VI died and placed his cousin Lady Grey Jane on the throne who after nine days was overthrown by Mary. Mary died in 1558 from a cancer that she thought was a child.
15. Elizabeth learned six languages. One of them was English, what were the other five?

Elizabeth inherited the throne in 1558. She was often described as robust, intelligent, beautiful and a lady of 'true English blood' unlike her sister who was half Spanish. She loved to keep people from guessing her real intentions and was a master of it.

She had her father's red hair which remind people of "Good King Henry" and she had the eyes of her mother. Elizabeth loved her people and even stopped her coronation parade to receive a flower from an old lady.
Source: Author aronnax 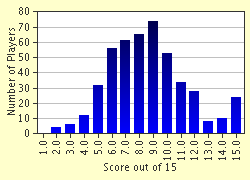 
Other Destinations
Explore Other Quizzes by aronnax