Are You Smarter Than Me? Trivia Quiz

In a Baseball for Dummies format, I scored a four. Beat that! Good luck. :-)

Quiz Answer Key and Fun Facts
1. How many times did Babe Ruth have 200 RBIs in a season throughout his career?

The Tigers began their franchise in 1901 amongst many other teams in the new American League in 1901. The Brewers were the Seattle Pilots in 1969. The Yankees were the Highlanders before becoming the Yankees. And finally, the Astros were the Houston Colt .45's in 1964.
3. Which of the following won the Rookie of the Year award 3 times?

All 3 listed won the rookie award, but a player can only win the award in his rookie year.
4. Pitching great Don Drysdale played his entire career with what team?

Drysdale's great arm was a part of the Dodgers organization from 1956-1969. His greatest season was in 1962, when he went 25-9 and won the Cy Young Award. Between Don's right arm, and fellow pitcher Sandy Koufax's left arm, this was a duo that terrorized National League batters in the 1960s.
5. What was the most number of home runs that Lou Gehrig hit in a season?

Gehrig popped for 49 twice in his career with the Yankees. 1934 was the first time he hit 49, and he won the Triple Crown in that season. 1936 saw him do it again, and he won the MVP that season. In 17 seasons, he hit 493 career home runs.
6. I've done it all. After playing 10 seasons with the Reds, I went to the Orioles and won the Triple Crown in my first American League season. I've won the season MVP in both leagues. I've won an All-Star MVP, World Series MVP, a Rookie of the Year award, and a Gold Glove. I hit over 500 home runs in my career. Who am I?

The others listed were all one-team players. Robinson began his career in 1956 with the Reds and won the Rookie of the Year. In 1966, in a Baltimore uniform, he won the Triple Crown, and hit 586 career home runs. Retiring in 1976 after 21 seasons, Frank became a manager in the big leagues.
7. What team won the 1896 World Series for the American League?

None of these teams existed in 1896, nor did the AL. The first World Series was not played until 1903, where the Boston Pilgrims/Americans defeated the Pittsburgh Pirates.
8. I played my first eight seasons with the Athletics. I wasn't even a regular starter until I pulled off the 1972 World Series MVP, by smacking four home runs. After that I was a starting catcher. After 15 seasons, I retired with 201 home runs. Who am I?

The others listed were never catchers. Gene also played for the Padres, Cardinals, and the Pirates in his final season of 1983.
9. Who led the Major Leagues in 1964 by hitting 49 home runs in the season?

The others listed were not in the Major Leagues yet. Oddly enough, Killebrew never hit 50 home runs in a season. He hit 49 twice, and also hit 48 with the Twins. He led the league six times in his career with home runs. After 22 seasons, he retired with 573 home runs in 1975.
10. Who was the first player to smack 4000 career hits?

The others listed were all pitchers. The official hit count for Cobb was 4,189 hits in his career, although there is still today, one hit being contested to add to his total. Cobb retired after 24 seasons in 1928, 22 of them with the Detroit Tigers.
Source: Author Nightmare 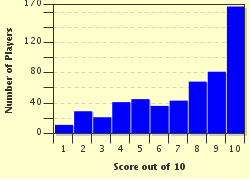