Can You Beat a Pair? Trivia Quiz

An all multiple choice quiz about pairs in baseball. Every single photo has a relationship to the answer somehow. The rest depends on you. I hope that you enjoy it. :)

It was the 1944 season when the St. Louis Browns and the St. Louis Cardinals met in the series. Both teams shared the ballpark throughout the season. This was pretty much the only highlight of the Browns' franchise, and the Cardinals wouldn't let it grow with a four games to two thrashing of the Browns. The Browns drew 508,000 fans during the season while the Cardinals drew 461,000.
The picture was of the famous Arch, the gateway to St. Louis.
2. Who were the first two managers in history to manage for over 30 seasons?

Mack had the helm of the Pittsburgh Pirates from 1894-1896, then an amazing 50 seasons with the Philadelphia Athletics from 1901-1950. McGraw managed a few seasons with the early Baltimore Oriole franchise which later became the Yankees. In 1902, he became the third manager of the season for the New York Giants, and stayed there until 1932, a total of 33 seasons. The others never hit the 25-season marker. In 2008, manager Tony LaRussa became the third manager in history to manage for 30 seasons.
The photo was of the cartoon character, Quick Draw McGraw.
3. Which Major League Baseball Award did Mariano Rivera and Armando Benitez win in the 2001 season?

Rivera was in his seventh season as a Yankee in 2001 when he led the league for the second time in saves with 50. He won his fifth Rolaids Award in 2009.
Benitez was in his eighth season in 2001, and the New York Met took 43 saves in the season to win the award. His career high was 47 in 2004, but Eric Gagne of the Dodgers won the Rolaids Relief Award in that season. Armando retired in 2008 after 15 seasons.
The photo shows products which provide heartburn relief, such as Rolaids.
4. Which two Hall of Fame baseball greats retired with 512 career home runs?

Banks was a 19-season career Cub, known mostly for this two MVPs at shortstop in 1958 and 1959, and being known as "Mr. Cub". He actually played in more games at first base. Mathews played in 17 seasons, and was the only player in history to play for all three Braves teams in Boston, Milwaukee, and Atlanta. Eddie was runner-up MVP to Banks in 1959. They both totaled 512 home runs, one more than the Giant great, Mel Ott.
The picture was of a window at Barclays Bank.
5. Who were the first two brothers ever inducted into the Hall of Fame?

Paul was nicknamed 'Big Poison' while Lloyd was tagged with 'Little Poison'. They shared the Pittsburgh Pirate outfield from 1927-1940. Paul batted a career .333 with 113 home runs, while Lloyd batted .316 with only 27 home runs. The Pirates had a big 1927 season going the World Series against the Yankees but lost. Paul was the NL MVP in the season while Lloyd finished sixth in the voting.
The picture was of Las Vegas star, Wayne Newton.
6. In the 1940s, Major League Baseball saw the first tie between two teams at the end of the season. Which two teams were these that had to have a playoff series?

The 1946 season saw the St. Louis Cardinals and Dodgers of Brooklyn tie with identical 96-58 records. They went to a best-of-three series to determine the NL Champions. The Cardinals won game one 4-2, then clinched it with a 8-4 game-two victory. St. Louis went on to win the World Series against the Red Sox.
The hardluck Dodgers would tie again in 1951 with the Giants, the year that experienced "the shot heard round the world" off the bat of Giant Bobby Thomson.
The photo was of a freeway sign exit to the Brooklyn Bridge.
7. In 1929, the New York Giants and Boston Braves went at it in the Polo Grounds of New York. A pair of players pulled off something that may never be duplicated again in history. What did these two players from each team do in the game?


Answer: Both had pinch-hit grand slams

The two players were Les Bell of the Braves and Pat Crawford of the Giants. Bell was in his seventh season and hit his pinch-hit grand slam off Ralph Judd. Crawford was a rookie in 1929, normally an infielder, and did his pinch-hit feat of Socks Seibold. The Giants won the game 15-8.
The picture was of some famous sliced Brotchen Salami, the grand salami of salamis. The grand salami is also the nickname of a grand slam in baseball.
8. The season MVP Award began in 1911, named the Chalmers Award. Two players tied for the coveted award only one time in the century. Which two players were they?

The only co-MVP season was 1979, and Hernandez of the Cardinals and Stargell of the Pirates shared the podium for the award. Keith had 211 hits, 11 home runs and batted .344 with 105 RBIs. Stargell had 119 hits, 32 home runs and batted .281 with 82 RBIs.
The photo is of the Hollywood Walk of Fame belonging to German actor, David Hasselhoff. The star itself might have led you to Willie Stargell.
9. The Federal League lasted for only two seasons in 1914 and 1915. Which pair of teams won the Federal League pennant in those seasons?

All the other teams never existed in the Federal League. The league's goal was to compete and eventually become the third Major League in baseball. They lured many players away from the American and National League with huge contracts, but could never get the fan base or support. The Hoosiers won their pennant by 1.5 games over the Chicago Chi-Feds. The Terriers took their pennant by .001 point over the Chicago Whales. No team in the league ever reached winning 90 games in a season.
The picture was of a Hoosier Carpet sales and service van.
10. Which pair of Hall of Fame Yankees wore the same jersey number, and had the number retired in both their honor? 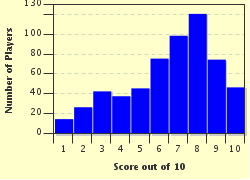