Changing of the Guard Trivia Quiz

Out with the old and in with the new. Baseball has been a constant recycling of great players throughout history. See if you can identify some of these greats. I hope that you have fun! :-)

Quiz Answer Key and Fun Facts
1. Hall of Fame great Ty Cobb, retired in 1928 after 24 seasons of baseball. 22 seasons with the Detroit Tigers saw him win 11 batting crowns, a Triple Crown, and a league MVP. 1928 saw the guard change in a rookie pitcher with the New York Giants. He would go on to pitch for 16 seasons with the Giants, win two MVPs, and be inducted into the Hall of Fame in 1947. Who was he?

Hubbell was overshadowed during his career by other pitching greats such as Dizzy Dean, Christy Mathewson, Walter Johnson, and others. Nicknamed 'Meal Ticket', Carl died at the age of 85 in 1988. Carl's final game was in 1943. In 1943, Hubbell's baseball recycler may have been Cincinnati Reds great Joe Morgan, born 26 days after Carl's final pitch.
2. In 1951, one of baseball's most favorites, Yankee Joe DiMaggio, walked away from baseball with many records. In 1951, another future world favorite was a rookie in New York also. He would win the Rookie of the Year award, and two MVPs in his career. Who was this slugger who hit over 600 home runs?

The others did not debut until the 1960s. Willie played 20 loyal seasons with the Giants, then was traded to the New York Mets. He retired with 660 home runs. Mays was a Hall of Fame inductee in 1979. With Mays retiring in 1973, his recycling replacement may have been the Royals' George Brett, who played from 1973-1993 with an AL MVP and three batting crowns.
3. Pitching great Sandy Koufax retired in 1966 with many Triple Crowns, MVPs, and pitching records, including striking out 382 batters in a season. In 1966, another pitching great debuted in the Majors, and would go on to break Koufax's season strikeout record. Who was Sandy's changing of the guard who threw seven no-hitters?

The other pitchers all retired in the 1950s. Ryan was a New York Met rookie in 1966, and went 0-1 in the season. Four teams, 27 seasons, seven no-hitters, and 5714 career strikeouts later, Nolan Ryan walked away from baseball as one of the most phenominal arms in baseball history in 1993.

As Nolan retired in 1993 with the Rangers, they also had a rookie pitcher in the name of Robb Nen, who might have been Nolan's changing of the guard.
4. Pitching great Ned Garver never received recognition for his pitching arm due to his years with the lowly St. Louis Browns. He retired in 1961. 1961 saw an American League rookie, who would be the last to win a batting Triple Crown in the 20th century. Who was this Hall of Famer who banged out 452 home runs?

The others were all pitchers, and debuted in the Major Leagues 10 seasons earlier. Yaz played his entire 23 seasons with the Red Sox. His 1967 Triple Crown also won him the AL MVP award over Harmon Killebrew. Carl's last game was on October 2, 1983. Yastrzemski's changing of the guard may have been Darryl Strawberry, who debuted with the Mets in 1983, and won a NL Rookie of the Year award.
5. The great Cy Young, who retired with the most wins in baseball history, played his final game on October 6, 1911. At the same time, a rookie pitcher debuted in the same season, went on to win three Triple Crowns, and lead the league in wins an amazing six times. Who was this future Hall of Fame great?

In 1930, Alexander's changing of the guard might have been Cardinal MVP pitcher Dizzy Dean, who pitched from 1930-1947, and was also a Hall of Famer.
6. Hall of Fame great Hank Aaron retired with 755 career home runs in 1976. His changing of the guard was a NL Rookie of the Year, played most of his career with the Expos and Cubs, and retired with 438 home runs. Who was this NL MVP and eight-time all-star who played from 1976-1996?

The others were all former Giants, and all retired before 1976. Dawson played for 21 seasons and retired in 1996. His MVP season was as a Cub in 1987. Andre's changing of the guard might have been Nomar Garciaparra, who debuted with Boston in 1996, and was also a Rookie of the Year winner.
7. Hall of Fame pitching great Bob Gibson won two World Series MVPs, two Cy Young awards, and a season MVP award with the St. Louis Cardinals from 1959-1975. Gibson's changing of the guard in 1975 was another pitching great, who spent his entire 14 seasons with the Yankees. Who was this 1978 Cy Young winner who retired in 1988?

The others were not pitchers. Guidry helped the Yankees to three World Series, and won three games himself. Ron's Cy Young award came over Mike Caldwell of the Brewers and Jim Palmer of the Orioles. Guidry's own changing of the guard was Randy Johnson, who debuted with the Expos in 1988, and would go on to win five Cy Young awards, along with a Triple Crown.
8. Warren Spahn was one of the greatest left-handers in baseball history. He won 20+ games in a season, six consecutive times during his career, and 13 times overall. He retired in 1965, and saw the changing of the guard with another Hall of Fame left-hander. This Hall of Famer won 20+ games in a season six times, and retired with the most career strikeouts as a left-handed pitcher. Who was this four-time Cy Young award winner?

Carlton pitched from 1965-1988, mostly with the Cardinals and Phillies. He retired with 4136 strikeouts, second to the great Nolan Ryan at the time. In 1988, Steve saw his own changing of the guard when Oriole rookie Curt Schilling took the mound.
9. St. Louis Cardinal Lou Brock had a Hall of Fame career. One of his high points was breaking Maury Wills' season stolen base record, by stealing 118 in 1974. Brock retired in 1979, changing the guard to a rookie who stole 33 bases, then would go on to virtually break every base stealing record in history. Who was this speedster that stole over 1400 bases?

The others never stole more than 20 bases in their career. Henderson retired with 1406 bases. He broke Brock's record of 118 by stealing 130 in 1982 with Oakland. Three times in his career, he stole 100+ bases in a season. Henderson retired in 2003. Rickey's changing of the guard might have been the Mets' Jose Reyes. 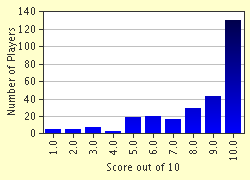