Baseball might be America's game, but it includes Hall of Fame greats from all over the world. I hope that you have fun with this one! :-)

Quiz Answer Key and Fun Facts
1. This pitcher was the first Canadian inducted into the Hall of Fame. Born in Chatham, Ontario, he pitched for four teams throughout his 19 seasons in the big leagues. He was a 1971 Cy Young winner, and 20 years later inducted into the hall. Who is this Canadian pitcher?

All the other pitchers died before 1971. Fergie broke in with the Phillies in 1965, and he retired in 1983. He also played for the Cubs, Rangers, and Red Sox. In addition to his Cy Young award, he was in the top three voting another four times. In 1967, he was tied for the runner-up with Jim Bunning behind Mike McCormick of the Giants.

He was also the runner-up to Catfish Hunter in 1974.
2. The first Puerto Rican inducted into the Hall of Fame was a career Pittsburgh Pirate. Wearing the number 21, he had exactly 3000 hits in his career. Who was this right fielder who was killed on December 31, 1972, then was inducted in 1973?

Clemente was well remembered for his airplane accident which carried relief supplies to Nicaraugua in 1972, and also as a player. Roberto was the 1966 NL MVP winner over Sandy Koufax of the Dodgers. Another Puerto Rican born Hall of Famer is Orlando Cepeda of the Giants/Braves. Cepeda was inducted into the hall in 1999.
3. This United States born Hall of Famer played 15 seasons with the Cubs, mostly at second base. He won nine Gold Gloves at the position, and was also the 1984 NL MVP. Who was this Cub that retired in 1997?

Ryne played with the Cubs from 1982-1997. He finished sixth in the Rookie of the Year voting. He also finished fourth for two other MVPs. Sandberg never saw a World Series game in his career. His induction took place in 2005.
4. The first Hall of Famer born in the Dominican Republic was a San Francisco Giant pitcher in the 1960s and 1970s. Six times in his career he won 20+ games in a season, but was always overshadowed by likes of Sandy Koufax and Bob Gibson. Who was this high-kicking pitcher?

Marichal went to one World Series in his career in 1962, but came up with no decisions. The Dodger-Giant hated rivalry extended to Marichal also, and it was ironic that he retired as a Dodger in 1975. He was inducted to the hall in 1983.
5. This Cuban-born player was inducted into baseball's Hall of Fame was a Cincinnati Red for 16 of his 23 seasons. Mostly seen at first base, he also played third base. Ironically, he never led the league in anything, but was that consistent each season to earn a spot in the Hall of Fame. Who was this player who went to five World Series?

The others were not Cuban born. Tony was born in Ciego De Avila. He also played a few seasons with the Expos and Red Sox. He retired in 1976 with 379 home runs. He was part of the 'Big Red Machine' in 1975 and 1976, helping to take the Reds to consecutive World Series crowns. In 2000, the Hall of Fame took him into its membership.
6. Venezuela was represented in the Hall of Fame when this shortstop was inducted in the 1980s. He set a record for playing 2583 games at that position. Who was this White Sox player?

Aparicio was born in Maracaibo, and played 15 of his 18 seasons with the White Sox, then his final three with the Red Sox. He retired in 1973, but not before winning nine Gold Gloves, the 1956 Rookie of the Year, and almost a MVP, finishing second to teammate Nellie Fox in 1959.
7. To prove that there were ships other than the Mayflower way back when, this England-born player-manager helmed the Boston Red Stockings of the new National Association from 1871-1875. He won four of the five pennants. Who was this 1953 Hall of Fame inductee?

The others weren't born yet for another 30+ years. Wright was born in Sheffield in 1835, and joined the new National League in 1876 after the NA closed its doors. He managed the Boston Red Caps (later Braves) until 1882. He also managed the NL Providence Grays for two seasons before taking the helm of Philadelphia for another 11 seasons.

He retired in 1893 at the age of 58, then died two years later.
8. This United States born pitcher made his name with the Tigers and Phillies. He retired in 1971 with 224 wins. Who is this pitcher?

The others weren't pitchers. Bunning tied for the runner-up spot in the Cy Young voting with Ferguson Jenkins in 1967. They both lost to Mike McCormick of the Giants. In less than three months in 1969, he went from the Pirates to the Dodgers, then back to the Phillies again. Jim was inducted in 1996.
9. This player was the first Hall of Famer who represented his home country of Panama. He played with the Twins and Angels. All seven of his batting titles came as a Twin. He also won the Rookie of the Year in 1967, and the 1977 MVP, also as a Twin. Who was this 1991 inductee?

Carew was a Twin from 1967-1978, then joined the Angels for another seven seasons. Rod went to the all-star game more than 10 times. Having never seen a World Series game, Carew went to four ALCS', but lost them all.
10. This Hall of Famer was born in San Diego, Calfornia. He was a one-team player throughout his career. He batted for two Triple Crowns, won two MVPs, and was the runner-up for another four MVPs. He also smacked over 500 home runs in his career. Who is this 1966 Hall of Fame great? 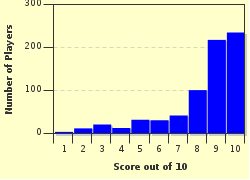