All multiple choice about New York's great baseball franchises. I hope that you have fun with it! :)

Share on Facebook
Share on Twitter
Share by E-Mail
Author
Nightmare
Time
3 mins
Type
Multiple Choice
Quiz #
315,604
Updated
Dec 03 21
# Qns
10
Difficulty
Average
Avg Score
7 / 10
Plays
478
Awards
Top 5% quiz!
This quiz has 2 formats: you can play it as a or as shown below.
Scroll down to the bottom for the answer key.

Quiz Answer Key and Fun Facts
1. The 2009 San Francisco Giants began their franchise in 1883 in the National League as a New York team. What was the franchise's name in that inaugural season?

The Gothams began it all in the 1883 season in the National League which formed in 1876. The franchise changed their name to the New York Giants in 1885, then won the league championship in 1888 and 1889. When "Major League Baseball" began in 1901 with the merge of the new American League, the Giants went to the second World Series in 1905 against the Philadelphia Athletics.

The Giants won the series four games to one with the help of the arm of Hall of Fame great Christy Mathewson, who won three games in the series.

In 1871, New York had their first-ever professional baseball team with the New York Mutuals. The team played from 1871-1875 in the National Association until the league folded.
2. The New York Yankee franchise began their endeavors in 1901 as a new American League franchise. What team name did the franchise begin their hopes with?

The franchise began as the Baltimore Orioles for two seasons. In 1903, the team moved to New York to become the New York Higlanders. The franchise kept the Highlanders name until 1913, when it was changed to the Yankees. The name Yankees would become immortal in baseball history.
3. In which year did the state of New York obtain a new National League franchise named the Mets, via league expansion?

The new Mets franchise joined Major League Baseball in 1962, along with another expansion team of the Houston Colt .45s. The Mets went through a horrible beginning from 1962-1968, finishing no better than ninth place of ten teams in the league. They would change baseball history by winning the World Series in the following season against the heavily-favored Baltimore Orioles, four games to one.
4. Which New York franchise manager helmed a New York team for 31 seasons?

John managed the National League Baltimore Orioles in the 1897 season, then managed that same franchise which jumped over to the new American League in 1901. The New York Giants hired him midseason of 1902 to manage them, and he stayed with the Giants until 1932. McGraw took the Giants to 11 National League pennants and won three World Series.

He died in 1934 at the age of 60. The Hall of Fame recognized John for all his managerial and player experiences, inducting him in 1937.
5. Who was the first New York Major League slugger to hit .400 in a season?

The Cy Young Award was named in honor of pitching great Cy Young, who won 511 games in his career. Young died in 1955, and Major League Baseball began the award in his honor in 1956. Don Newcombe of the Dodgers won the inaugural award. In the award's third season in 1958, Turley won it for the Yankees with his 21-7 record.

He won the award over Warren Spahn and Lew Burdette of the Braves, and Bob Friend of the Pirates.
8. Which New York baseball team won the 1951 World Series?

The Giants earned their right to the World Series after tying the Brooklyn Dodgers for the regular season, then defeating the Dodgers in a playoff series. The Yankees won the American League pennant by five games over the Cleveland Indians. They won the 1951 World Series four games to two over the Giants, with the arm of Ed Lopat.
9. Which New York team earned the nickname of 'Bronx Bombers' in 1927?

This immortal team in 1927 consisted of Babe Ruth who hit 60 home runs, Lou Gehrig who batted .373 with 47 home runs, pitcher Waite Hoyt who went 22-7, and a host of others. The Yankees defeated the Pittsburgh Pirates four games to none in the World Series.
10. Which manager took a New York team to 10 World Series in 12 seasons?

After managing the Brooklyn Dodgers and Boston Braves' franchise, Stengel took the Yankees to 10 World Series appearances from 1949-1960. He and the Yankees won seven of those. Unfortunately, he also took control over the new New York Mets in 1962, and lost 100+ games in each of the first four seasons. Casey was inducted into baseball's Hall of Fame in 1966.
Source: Author Nightmare

This quiz was reviewed by our editing team before going online.
Any errors found in FunTrivia content are routinely corrected through our feedback system.
Most Recent Scores
Nov 10 2022 : Guest 24: 8/10
Oct 27 2022 : DomiNeyTor: 10/10 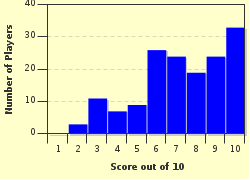