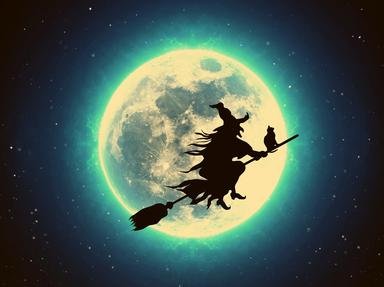 How much do you know about Bewitched? This category is for trivia questions and answers related to Bewitched (Television). Each one is filled with fun facts and interesting information.
Related Questions & Answers:   Batman    Big Brother    Big Bang Theory    Andy Griffith Show    American Idol    Blackadder    Breaking Bad    Bad Girls    Coronation Street    Criminal Minds
1 What was the name of Darrin and Samantha's son?


Adam was the name of Darrin and Samantha's second child, but only son. It was originally believed Adam was a mortal but was later shown (in the final season) that Adam had magic of his own. While Adam was a warlock on "Bewitched", he was a mortal on the spin-off series "Tabitha".
The births of Adam and Tabitha were a result of Elizabeth Montgomery being pregnant while filming episodes of the show.

From Quiz: An Introduction to "Bewitched"

2 The main character in "Bewitched", that of Samantha Stephens, was played by which lovely actress?


Elizabeth Montgomery (1933-1995) played Samantha for the entire length of this excellent series, appearing in a total of 254 episodes in all. During this time, we see her character Samantha going from a young newly married woman, who happens to be a witch married to the mortal Darrin, right through to the birth of two of the couple's children. Her main role in the series is acting as peacemaker between her irascible husband and her equally irascible mother as the two constantly butt horns, with disastrous consequences for Darrin when he raises the ire of that fiery older woman. Samantha, by the use of her magical twitching nose, has to fly to his rescue with the use of counter spells and solutions just in time to save the day.

From Quiz: Bewitched Bothered and Bewildered

3 Which actor, once married to a member of the Kennedy clan, guest starred as Harrison Woolcott?


Peter Lawford guest starred as Harrison Woolott, a love interest for cousin Serena in the episode titled, "Serena's Richcraft". Mr. Lawford was married to Patricia Kennedy, the fourth daughter of Joseph and Rose Kennedy, from 1954-1966.

From Quiz: "Bewitched": The Guest Stars

4 Which gorgeous actress played the part of Samantha?


Elizabeth Montgomery, born April 15, 1933, played the role of everyone's favorite witch, Samantha Stephens, for eight seasons. Ms. Montgomery went on to star in many television movies. Unfortunately, the beautiful actress passed away in 1995 of cancer.

5 Why were Samantha's powers taken away from her?

Answer: Because she was married to a mortal


The witches council disapproved of Sam's marriage to a mortal, so they told her she had to divorce Darrin or "suffer the consequences".

6 In "Samantha Goes South for a Spell," where does Brunhilde send her?


Brunhilde, mistaking Sam for Serena, sends her back to 1868 New Orleans and Darrin has to go back in time to rescue her!

7 What does Aunt Clara turn Darrin into in "Alias Darrin Stephens"?


Sam has just found out that she is pregnant and can't wait to tell Darrin, but first she has to rescue him from the other chimps at the zoo.

8 In "Double, Double... Toil and Trouble," what does Endora do to try and get rid of Darrin?

Answer: Gets Serena to pose as Sam


Sam is away for the day and doesn't know that Serena has come. Darrin doesn't work out that Sam is actually Serena until they start a pie fight.

9 In "The Moment of Truth," what does Darrin follow up to Tabitha's room, proving to him that she is a witch?


Darrin is entertaining Larry and Louise Tate when he sees the saucepan floating upstairs. Horrified he follows it to Tabitha's room, looking for Aunt Clara or Endora, but finding only Tabitha and Sam.

10 Endora promises Darrin that she would let him know in advance when she was going to pop in next. How does she do this?

Answer: It is announced on the morning news


Darrin is watching the morning news and hears a special announcement, "Darrin Stephens, of this city, will have a visit from his mother-in-law today." Immediately after this Endora appears.

From Quiz: "Long Live the Queen!"

11 What does Endora say she will call the Stephens' baby no matter what they name her?


"Tabitha? Now where did you happen to get a name like Tabitha?" - Darrin

From Quiz: "And Then There Were Three"

12 In which episode did Darrin find out Tabitha was a witch?

Answer: The Moment of Truth


Darrin discovers Tabitha has inherited her mother's witchcraft in the episode 'The Moment of Truth' - the second to air in the third season.

Samantha and Endora found out in the previous episode 'Nobody's Perfect'.

Your options: [ The Moment of Truth ] [ Witches and Warlocks Are My Favourite Things ] [ Nobody's Perfect ] [ And Then There Were Three ]

13 What year was the premiere in the United States of "Bewitched"?

From Quiz: A Bewitching Quiz

14 In which episode did Serena make her first appearance?

Answer: 'And Then There Were Three'

15 In which episode did Endora first meet Darrin?


Endora spies on Darrin in the first two episodes, but they actually get introduced in 'Mother Meets What's-His-Name'.

From Quiz: The Dreaded Mother-In-Law

16 In which episode did Samantha find out Tabitha was a witch?

From Quiz: The Tabitha Years

17 Who was the only character to appear in all episodes of this show?


Played by the lovely Elizabeth Montgomery.

18 What is the Stephens' address?


Gladys and Abner Kravitz lived at 1163.

From Quiz: 'Bewitched' For Die-Hard Fans


Endora usually wore purple because that was the actress' favorite colour.

20 What was Samantha's mother's name?

21 Although he's the most famous example, Darrin was not the only character to be portrayed by multiple actors. Who else was portrayed by two different actors?


The Stephens' nosy neighbor Gladys Kravitz was played by two different actresses. She was played by Alice Pearce for the first two seasons and by Sandra Gould for the rest of the series. Gladys was married to Abner, who didn't believe his wife's stories about the strange things surrounding Samantha.
Louise Tate and Frank Stephens were also played by multiple actors. (This excludes Tabitha and Adam, since they were young, and it's common to have characters that young played by multiple people, usually twins, due to child labor laws.)

From Quiz: An Introduction to "Bewitched"

22 The role of Darrin Stephens, the much put upon husband of Samantha, was played by two men over the course of the series. One was Dick York. Who was the other?


Dick York (1928-1992) played the role of Darrin for the first 156 episodes of "Bewitched". In the early part of his career, he had injured his back badly during the making of a movie. For the rest of his life this caused his enormous pain, but he continued acting in spite of it all. He was in such agony during the making of "Bewitched" that in the latter part of his time on the series, he often had to be filmed lying in bed or on a couch. He finally couldn't go on any longer, and, with the greatest reluctance, had to give up his role. His character was not written out of the series but replaced by another actor instead. Dick York spent the greater part of the rest of his life bedridden from this injury, only well enough to occasionally appear in other television series in guest star roles.

From Quiz: Bewitched Bothered and Bewildered

23 Which actor, real-life father of an actor from the "Partridge Family", guest starred as Rance Butler?

From Quiz: "Bewitched": The Guest Stars

24 Which talented actor played the part of the first Darrin?


Dick York, born September 4, 1928, played the part of Darrin Stephens, Samantha's mortal husband, from 1964-1969. He left the popular role due to a chronic back ailment. He passed away in 1992 from emphysema.

25 Who pops out of the toaster?


"Just thought I'd pop up and see you sometime!" - Arthur

26 Whose son does Endora promise Sam would marry in "Darrin, Gone and Forgotten"?


When Sam was born, Endora agreed that she would marry Carlotta's son, Juke. Juke has pictures of Sam all over his bedroom, yet he has never met Sam and does not love her.

27 What does Endora do to Darrin in "A Very Special Delivery"?


Darrin keeps ordering Sam to do things around the house. Endora makes him feel pregnant so he knows exactly how Sam is feeling.

28 What is the name of Darrin's ex-girlfriend from "No Zip in my Zap"?


Sam loses her powers, which is probably a good thing, because otherwise Mary might have ended up as a doormat! Mary Jane was played by actress Mala Powers. Mala also played Mona on the TV series "Hazel", which aired in 1965 and 66.

29 Whose school does Endora want Tabitha to go to in "Witches and Warlocks are My Favourite Things"?

30 Samantha is given a letter from Ticheba, Queen of the Witches. What does it say?

Answer: She is coming to visit

From Quiz: "Long Live the Queen!"

31 When Serena comes to visit, what does she offer to give the baby?

Answer: A centaur or a unicorn


"I'd like to leave a little play thing for the baby, I thought a centaur might be nice! If you don't want a centaur then I can always give her a unicorn instead." - Serena

From Quiz: "And Then There Were Three"

32 How many babies played Tabitha?


In all seven babies played Tabitha. The first was Cynthia Black who appeared in just one episode - 'And Then There Were Three.' Cynthia was then replaced by slightly older twins Heidi and Laura Gentry. The Gentry twins were then replaced by Julie and Tamar Young who appeared in the role for the remainder of the second season. Starting with the third the role was played by Erin and Diane Murphy.

There were also two adult Tabithas - Liberty Williams and Lisa Hartman - who appeared in two separate spin-offs. The final Tabitha was Cindy Eilbacher who voiced the young witch in an animated feature 'Tabitha and Adam and the Clown Family'

33 How many different actresses played Samantha on the TV series?

From Quiz: A Bewitching Quiz

34 What did Serena often call Larry?


Serena used to tell Larry that she was "wild about grey hair" too.

35 What is Endora allergic to?


In the episode 'Allergic to Macedonian Dodo Birds', Endora loses her powers because she has come in contact with a Macedonian dodo bird. It is then discovered that Endora is allergic to dodo birds.

From Quiz: The Dreaded Mother-In-Law

36 How many sets of twins played Tabitha?


In total, there have been 9 Tabithas over the years, but only 6 of them were twins. Heidi & Laura Gentry were the first set of twins. They played Tabitha in episode 54. Tamar & Julie Young played Tabitha from episode 55 to 74. Erin and Diane Murphy continued to play Tabitha from episode 75, until the show ended. As well as the Gentry twins, in " And Something Makes Three", Cynthia Black also played Tabitha. The eighth Tabitha was played by Liberty Williams, in a spin off show called 'Tabatha' in 1976. This show never took off. The final Tabitha was played by Lisa Hartman, in another spin off show called 'Tabitha' in 1977. This show was picked up for 12 episodes.

From Quiz: The Tabitha Years


Dick York appeared in 156 episodes. His replacement, Dick Sargent, was in 84 episodes.

38 What is Larry and Louise Tate's son's name?

From Quiz: 'Bewitched' For Die-Hard Fans

39 Samantha had a daughter named:


Tabitha was a witch - much to her father's dismay.

40 What business was Darrin in?


Many of the 'problems' in the episodes were because of his business relations and Samantha's family.

The rest of the questions and answers can be found in our quizzes here:
Bewitched Quizzes