10 Average Questions about Guess the Song

Share on Facebook
Share on Twitter
Share by E-Mail
Author
valjoedg
Time
4 mins
Type
Multiple Choice
Quiz #
353,148
Updated
Dec 03 21
# Qns
10
Difficulty
Average
Avg Score
6 / 10
Plays
1180
This quiz has 2 formats: you can play it as a or as shown below.
Scroll down to the bottom for the answer key.

Quiz Answer Key and Fun Facts
1. What song does this lyric come from? "Into the distance a ribbon of black. Stretched to the point of no turning back."

"Learning to Fly" by Pink Floyd off their "Momentary Lapse of Reason" album and released in 1987. The video opened with a young teenager in a field with a plane coming down but flying just above him.
2. What song does this lyric come from? "I can feel no sense of measure no illusion as take refuge young man's pleasure breaking down the dreams we make...real."

"Leave It" by Yes from the album "90125" which was released November 7, 1983. The group were in suits but their feet were at the top of the screen and they went all over the place during the video.
3. What song does this lyric come from? "Is this the real life? Is this just fantasy? Caught in a landslide, no escape from escape from reality."

"Bohemian Rhapsody" by Queen from their album "A Night at the Opera" and released October 10, 1975. At the Freddie Mercury Tribute Concert Sir Elton John and Axl Rose sang their version and The Muppets. The song received an MTV Movie Award which was accepted by Brian May and Roger Taylor in 1992.
4. What song does this lyric come from? "Can't you see that I am not afraid? What was that promise that you made? Why won't you tell me what she said?"

"Touch Me" was on the B-side of "Wild Child" and was released in December 1968. It was written by Doors member Robby Krieger. During a performance on "The Smothers Brothers Show" it was him who had a black eye courtesy of Jim Morrison.
5. What song does this lyric come from? "Well, we're big rock singers, we got golden fingers and we're loved everywhere we go (That sounds like us) We sing about beauty and we sing about truth at ten-thousand dollars a show (Right) We take all kinds of pills that give us all kind of thrills but the thrill we'll never know"


Answer: "Cover of the Rolling Stone"

The song was released on the B-side of "Queen of the Silver Dollar" in 1973 and was written by Shel Silverstein, writer of "Where The Sidewalk Ends".
6. What song does this lyric come from? "Oh I've been traveling on a boat and a plane In a car on a bike with a bus and a train. Traveling there and traveling here. Everywhere in every gear."

"Any Road" was written by George Harrison from the album "Brainwashed" and released in May 2003 a year and half after George's death. The album was produced by George's friend Jeff Lynne and his son Dhani Harrison.
7. What song does this lyric come from? "Won't you come see about me? I'll be alone, dancing, you know it, baby Tell me your troubles and doubts-- Giving me everything inside and out"


Answer: "Don't You Forget About Me"

It was released in 1985 by Simple Minds and was featured in "The Breakfast Club" beginning and ending.
8. What song does this lyric come from? "Been beat up and battered round. Been sent up, and I've been shot down. You're the best thing that I've ever found"

It was released in December 1988 on "The Traveling Wilburys Vol. 1". The members included: George Harrison, Jeff Lynne, Tom Petty, Bob Dylan and Roy Orbison. The video of the same name included pictures of the members of the band. But since the video was released after Orbison's death a rocking chair with his guitar was shown with his voice in the background. Jeff Lynne and Tom Petty later performed the song at The Concert for George in November 2002.
9. What song does this lyric come from? "On the first part of the journey, I was looking at all the life. There were plants and birds, and rocks, and things, There was sand and hills and rings."


Answer: "A Horse with No Name"

The song "A Horse With No Name" was released by America on the album of the same name "America" in January 1972. George Martin, producer of The Beatles, was also producer for America.
10. What song does this lyric come from? "Melinda was mine till the time that I found her. Holding Jim. Loving Him. Then Sue came along. Loved me strong. That's what I thought. Me and Sue. But that died too."

"Solitary Man" is from the album "The Feel of Neil Diamond" and was released in April 1966.
Source: Author valjoedg

This quiz was reviewed by FunTrivia editor kyleisalive before going online.
Any errors found in FunTrivia content are routinely corrected through our feedback system.
Most Recent Scores
Jan 19 2023 : Hayes1953: 6/10
Jan 14 2023 : sw11: 10/10 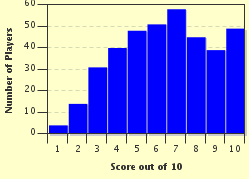