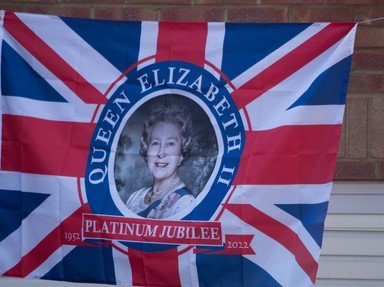 How much do you know about Elizabeth II? Quiz

This quiz is about Britain's Queen Elizabeth II, to whom I am distantly related.

Quiz Answer Key and Fun Facts
1. Her Majesty was what number monarch since William the Conqueror?

The Queen was Head of State of the UK and 15 other Commonwealth realms.

The elder daughter of King George VI and Queen Elizabeth was born in 1926. She became Queen at the age of 25, and reigned through more than five decades of enormous social change and development.

The Queen was married to Prince Philip, Duke of Edinburgh, and had four children and eight grandchildren.

She was the fortieth monarch since William I (William the Conqueror), and also the great-great-granddaughter of Queen Victoria.
2. Who were Her Majesty's parents?

She was the first child of the Duke and Duchess of York, who later became King George VI and Queen Elizabeth.

At the time she stood third in line of succession to the throne after Edward, Prince of Wales (later King Edward VIII), and her father, The Duke of York. But it was not expected that her father would become King, or that she would become Queen.
3. Where were Princess Elizabeth and Princess Margaret Rose moved to during the height of the blitz in 1940?

In 1940, at the height of the blitz, the young princesses were moved for their safety to Windsor Castle, where they spent most of the war years.

It was a time of austerity and anxiety for the whole country, including the Royal Family. But at Christmas time there was a period of light relief when the young princesses put on pantomimes with the children of members of staff for the enjoyment of her family and employees of the Royal Household.
4. In 1942, Princess Elizabeth was appointed to what position?


Answer: Colonel-in-Chief of the Grenadier Guards

In early 1942 Princess Elizabeth was appointed Colonel-in-Chief of the Grenadier Guards, and on her sixteenth birthday she carried out her first public engagement, when she inspected the regiment.

In April 1943, Princess Elizabeth carried out her first solo public engagement, when she spent a day with a Grenadier Guards tank battalion in Southern Command.

From that time onwards, her official duties increased. She was particularly involved with organisations connected with young people. She was President of the Queen Elizabeth Hospital for Children in Hackney, London, and the National Society for the Prevention of Cruelty to Children.
5. What year was Princess Elizabeth created a Lady of the Garter at a private investiture by the king?

Her first official overseas visit took place in 1947, when she accompanied her parents and sister on a tour of South Africa.

During this tour she celebrated her twenty-first birthday, and gave a broadcast address dedicating herself to the service of the Commonwealth - a dedication she repeated five years later on her accession to the throne.

In November 1947, Princess Elizabeth was created a Lady of the Garter at a private investiture by the King.

In a broadcast on her 21st birthday, Princess Elizabeth made a vow dedicating herself to service of the Commonwealth:

"I declare before you all that my whole life, whether it be long or short, shall be devoted to your service and the service of our great imperial family to which we all belong."
6. Where was Her Majesty when she learned that she had become Queen of Great Britain?

After her marriage in 1947, Princess Elizabeth paid formal visits with the Duke of Edinburgh to France and Greece, and in autumn 1951 they toured Canada.

Princess Elizabeth also visited Malta four times while Prince Philip was stationed there on naval duties, and enjoyed the life of a naval wife and young mother.

This way of life was not to last long, as her father's health was deteriorating. In 1952, King George VI's illness forced him to abandon his proposed visit to Australia and New Zealand. The Princess, accompanied by Prince Philip, took his place.

On Wednesday, 6 February 1952, Princess Elizabeth received the news of her father's death and her own accession to the throne, while staying in a remote part of Kenya.

The tour had to be abandoned, and the young Princess flew back to Britain as Queen. She was greeted by Prime Minister Winston Churchill and other officials at the airport.
7. Who was Her Majesty's first Prime Minister?

From the earliest days, the Queen took up her new role with energetic commitment.

Political duties began immediately, from the State Opening of Parliament to weekly audiences with the prime minister. The first prime minister of The Queen's reign was Winston Churchill, who had begun his second term as prime minister in November 1951.

During the decade the Queen had occasion to exercise her Royal prerogative, appointing Harold Macmillan as prime minister in 1957. At that time, the Conservative Party did not have any electoral machinery for choosing a new leader, and the Queen acted on the advice of government ministers, and above all, of the outgoing prime minister.
8. Where did Her Majesty go on her first regional tour?

The Queen took her role as Queen of the whole of the United Kingdom seriously. She began a wide-ranging programme of visits throughout every part of the country.

Her first regional tour was a three-day visit to Northern Ireland. In the same decade The Queen traveled north, south, east and west, from Shetland to the Isles of Scilly, and from Swansea to Holy Island.
9. In what year was a public gallery opened at Buckingham Palace to display items from the Royal Collection?

The second decade of the Queen's reign saw the introduction of a number of innovations to make the work of the monarchy accessible to an even wider range of people.

In 1962 a public gallery was opened at Buckingham Palace to display items from the Royal Collection. The brainchild of the Duke of Edinburgh, the new Queen's Gallery proved very popular.
10. In what year did Her Majesty help the United States celebrate its Bicentennial? 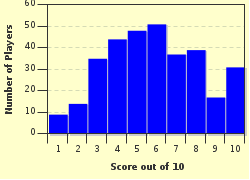