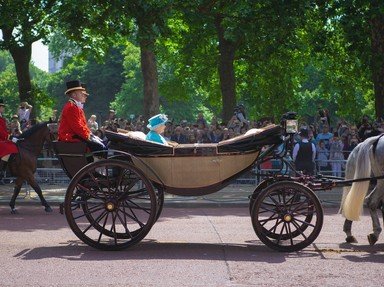 It seemed an omission, in this Golden Jubilee year, that there were no quizzes on Queen Elizabeth II, or 'Lilibet' as she was affectionately known to her family. I hope you enjoy this one.

Quiz Answer Key and Fun Facts
1. Following the death of her father in February 1952, the new Queen returned to London. The first person to greet her was her Prime Minister. Who was he?

Elizabeth was at Treetops, a game lodge overlooking a watering hole in Kenya, when her father passed away in his sleep 3000 miles away at Sandringham. The following day Winston Churchill, by then in his late seventies, was waiting on the tarmac, sombre, bareheaded and dressed in black, to welcome her home as the new Queen.

He would spend many hours with Elizabeth guiding and supporting her, and remained her Prime Minister for the next three years until ill health forced his resignation.
2. During the first fifty years of her reign Queen Elizabeth was served by ten British Prime Ministers. Which of the following was NOT one of them?

Attlee was replaced by Churchill in 1951. Eden served 1955-57; Douglas-Home 1963-4, and Callaghan 1976-79.
3. In 1957, at the suggestion of her then Prime Minister, Harold Macmillan, the Queen honoured her husband with the title 'Prince'. Now known as Philip Mountbatten, what was Prince Philip called at birth?

Fifth in line to the Greek throne, the young Philippos spent his childhood in exile in Britain at the home of his uncle, Louis Mountbatten (formerly Battenberg). During his school years Philippos became Philip, and, prior to his marriage to Elizabeth, Philip relinquished his Greek title and took British citizenship in the name of Mountbatten.
4. Greeted with affection and instant recognition wherever she went, the Queen was the most traveled monarch in history. In October, 1994 she was the first reigning British Monarch ever to set foot in which country?

On October 17th 1994 the Queen and Prince Philip began a State visit to Russia, where they attended a Banquet at the Kremlin, hosted by President Yeltsin and his wife. During her speech the Queen emphasized Britain's commitment to a future working together with Russia.
5. As Canada's Head of State, at the time of her Golden Jubilee the Queen had also been served by nine Canadian Prime Ministers. Which of following was NOT one of them?

Richard Bennett was in power from 1930 until 1935, at which time the nine year old Princess Elizabeth was still blissfully unaware of her destiny!
6. Which year of the 1990s did the Queen famously declare to be her 'annus horribilis'?

1992, the fortieth anniversary of her accession, was not a good year for the Queen. It saw the divorce of her daughter, the disintegration of the marriages of two of her sons, with the publishing of both Princess Diana's 'Squidgy-gate' conversations and compromising photographs of the Duchess of York. Part of Windsor Castle was destroyed by fire, and the Queen was forced into agreeing to pay income tax.

Not a good year by anyone's standards!
7. The 6th of February 2002 marked the beginning of Golden Jubilee Year for Queen Elizabeth II. Golden Jubilees are rare occasions for a monarchy. There have only been five such events in British history. The last was Queen Victoria's in 1887, but whose was the one before that?

In 1810 George III's 50 year reign was marked with fetes and firework displays, both in Britain and the Colonies. Unfortunately it was around this time that he went permanently insane, and for the remaining ten years of his reign his son ruled as Regent. The other two monarchs to reach their golden jubilees were Henry III in 1266 and Edward III in 1377.
8. In 1972 the Queen and Prince Philip celebrated their silver wedding anniversary. It was also a year of personal sadness, seeing the death of two members of the royal family. One member was the Queen's cousin, Prince William of Gloucester, who died in a flying accident at the age of 30. The other was the _____ ____ _____ .

The Duke of Windsor, the former King Edward VIII, died in Paris from lung cancer at the age of 77. Just ten days earlier Queen Elizabeth II had paid a final visit to her uncle.
9. At the time of Pope John Paul II's historic visit to Britain in 1982 British troops were heavily involved in conflict. Where was this taking place?

When the Queen entertained the Pope at Buckingham Palace it was the first papal visit for 450 years. Whilst there he promised to pray for the safe return of Prince Andrew, who, as the pilot of a Sea King helicopter, was serving in the South Atlantic with British troops trying to recover the Falkland Islands from Argentina.
10. As part of the Queen's Jubilee celebrations a special portfolio of photographs has been commissioned to be displayed at Windsor Castle. Which famous Canadian singer was invited to photograph the Queen and Prince Philip for this exhibition?

In 2001, a select group of photographers from Britain and the Commonwealth were invited to Buckingham Palace to 'snap' the Queen and her husband. Bryan Adam's portrait features the royal couple standing at the gated private entrance to the palace. It is not the first time this keen photographer has taken pictures of the Queen.

A picture he took of her two years ago was used as part of a fundraising project for breast cancer.
Source: Author fringe 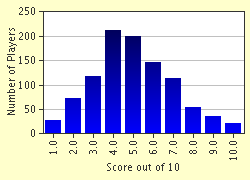