All you have to do is match the event with the year in which it happened. All questions are multiple choice and if you know your Tudor history it should be a breeze. Have fun!

Henry Tudor defeated the armies of Richard III at the Battle of Bosworth in August 1485, and ascended the throne as Henry VII.
2. The marriage of Henry VIII and Catherine of Aragon:

Henry VIII became King in 1509 and married his brother's widow, Catherine, shortly after.
3. The birth of Elizabeth I:

Elizabeth, the daughter of Henry VIII and Anne Boleyn, was born on September 7, 1533.
4. The execution of Katherine Howard:

Katherine Howard, Henry VIII's fifth wife, was beheaded on February 13, 1542. She had committed adultery with her cousin Thomas Culpeper.
5. The marriage of Mary I and Philip of Spain:

Mary, known as Bloody Mary, married the Philip in 1554 at the urging of her relative, the powerful Emperor Charles V, who was also Philip's father. The marriage was childless.
6. When was Elizabeth I crowned?

Elizabeth became Queen in November 1558 upon the death of her sister Mary, and she was crowned on 15 January 1559.
7. The execution of Mary, Queen of Scots:

Mary had been Elizabeth's prisoner for many years after the former fled Scotland and sought sanctuary in England. Elizabeth was reluctant to execute a fellow monarch, not to mention a cousin, but after a series of plots involving Mary were discovered, Elizabeth had no choice but to eliminate her rival. Mary was beheaded on February 8,1587.
8. The defeat of the Spanish Armada:

The ships of Sir Francis Drake drove back the invading Spaniards in 1588.
9. The death of Elizabeth I:

Elizabeth died in March 1603 in her seventieth year.
10. The dates from which the Tudor dynasty ran:

The Tudor dynasty began with the accession of Henry VII in 1485 and ended with the death of the childless Elizabeth I in 1603. The Tudors were succeeded by their relatives, the Scottish Stuarts.
Source: Author avory 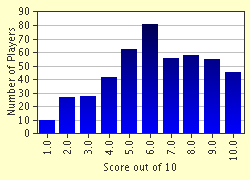