Duran Duran: There Is Something You Should Know Quiz

Welcome to the Duran Duran quiz. We will dive deeper into the musical world of this phenomenal band. Good luck and have fun!


Answer: Hold Back The Rain

"Hold Back The Rain" was released on the "Rio" album. It was also a B-side to "Save A Prayer", there have been 3 other versions of the track. It was written by Simon Le Bon about his worry for John Taylor with his downhill lifestyle towards drugs.
2. Which of the band's videos is filmed completely in black and white?

This track is also featured on the "Rio" album but was originally written in around 1978 by Simon Le Bon. An earlier version of the track can be found on the "Rio" single. Although the video has none of the band in it, Andy Taylor makes a cameo on a bridge bumping into the lady in the story. Very sneaky!
3. How many alternate versions of "Rio" are there found on other albums of Duran Duran, not including the original song?

This track is featured on the 'Pop Trash' album. There is also a short instrumental track that is the same as this song named 'Kiss Goodbye'.
5. What is the name of Duran Duran's compilation of their remixes?

This is a double C.D featuring all the best DD tracks but either extended or given a new boost. A perfect buy for fans.
6. According to 'Pop Trash', what are Duran Duran "playing with"?

This is another great track from 'Pop Trash'. The album was released in the U.S on 13th June 2000 and the U.K on June 19th.
7. What is the only song in which Nick Rhodes has provided the vocal talent?

This is a very strange piece of work, but also highly addictive and a great creation. Nick Rhodes' vocals were perfect for the track.
8. How many singles were released from the 'Medazzaland' album in the U.K?

The singles that were released are: 'Electric Barbarella' and 'Out Of My Mind'. Both excellent tracks, but didn't get very high in the charts.
9. The album cover of 'Medazzaland' has a graffiti-style version of which of their previous album covers?

The album cover features Rio herself with a scary new look. It took me a week to realise it was Rio on the cover!
10. "Now you washed up, beat smashing, grab no receipt. Takes the platinum off your shine". What song features that line?

This is another brilliant track from Duran Duran's comeback album, Astronaut, which reached number 3 in the U.K and 17 in the U.S.
Source: Author wezroft 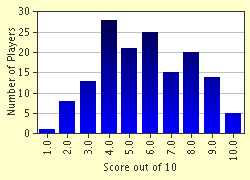 
Other Destinations
Explore Other Quizzes by wezroft