This is a simple quiz. I give you the name of a Doors song, you give me the correct studio album on which the song originally appeared. Only the 8 studio albums (6 with Morrison, 2 without) are covered.

Share on Facebook
Share on Twitter
Share by E-Mail
Author
berenlazarus
Time
5 mins
Type
Multiple Choice
Quiz #
290,581
Updated
Dec 03 21
# Qns
10
Difficulty
Tough
Avg Score
6 / 10
Plays
633
This quiz has 2 formats: you can play it as a or as shown below.
Scroll down to the bottom for the answer key.

Quiz Answer Key and Fun Facts
1. "Break On Through (To the Other Side)" was The Doors' first single; however, the song failed to chart in the singles chart. What album is it from?

"Break on Through (To the Other Side)", now considered a classic rock song, was a bomb on the single charts. It wouldn't be until The Doors released "Light My Fire" that the band became well known.
2. "Not to Touch the Earth" is a segment of a much longer, experimental work that the band was never able to complete in the studio, although studio versions do exist. What album is this song from?


Answer: Waiting for the Sun

Morrison wrote a long epic entitled "Celebration of the Lizard". However, the band wasn't able to make the song work musically and ultimately abandoned it, much to Morrison's distress. They performed the song live (a live rendition appears on their double live album from 1970, "Absolutely Live"), but the first time that a studio version was released was on the 2003 CD, "Legacy". Because the song would have taken much of the second half of the album "Waiting for the Sun", the band had to write extra material to fill up the last half of the album.

The band was only able to salvage "Not to Touch the Earth", a four minute segment, for the album
3. "Who Scared You" is notable for being one of The Doors' few B-Sides that did not appear on a specific album. The A-Side to the single was "Wishful Sinful". What album does "Wishful Sinful" appear on?

"Who Scared You" was released again in 1972 on the greatest hits compilation "Weird Scenes Inside the Goldmine", and first appeared on CD in 1997 with the release of "The Doors Box Set". However that version ran only 3:16 and deleted a verse. The full song wasn't released on CD until 2006's "Perceptions".
4. "You Need Meat (Don't Go No Further)" is a Willie Dixon cover recorded by the band and appeared as the B-Side to "Love Her Madly". The song is notable for being one of only three B-Sides released in support of the studio albums which do not appear on them. Which album does the A-Side appear?

Like "Who Scared You", this song appeared on "Weird Scenes Inside the Goldmine," but did not appear on CD until 2007 when it was a bonus track on "L. A. Woman".
5. The song "Waiting for the Sun" appears on what album?

"Waiting for the Sun", like Led Zeppelin's "Houses of the Holy", does not appear on the album of the same name. The band began recording the song during the "Waiting for the Sun" sessions, only to abandon it. They finished it and released it on "Morrison Hotel" in 1970.

The fact that the band abandoned the song is even more curious, given the fact that due to the cancellation of "Celebration of the Lizard" from the 2nd half of the album, the band was hard pressed to find extra material to fit onto "Waiting for the Sun".

The Doors actually resurrected two songs from 1965 to be included on "Waiting for the Sun", one of which became a huge international hit. These two songs are "Hello I Love You" and "Summer's Almost Gone".
6. "Tightrope Ride" appears on what album?

"Tightrope Ride" appears on "Other Voices", the first of two albums The Doors recorded after Jim Morrison's untimely demise in 1971. Ray Manzarek provides lead vocals. The song was first released officially on CD on "The Doors Box Set". Oddly enough, in the many box sets The Doors have released, the two post Morrison albums have never been included and are still out of print, though you can get the albums via other sources. "Tightrope Ride" appears to be a homage to Jim Morrison and Brian Jones, and about mortality in the rock and roll industry.
7. Which album does "The Peking King and the New York Queen" appear on?

This is the last song on the last official studio album by The Doors. "Full Circle", like its earlier sibling "Other Voices", is not available from Elektra Records, though it can be found elsewhere. The song deals with the romance between an Asian Man and an American woman and contrasts the cultures between the two lovers.

The song is autobiographical about Ray Manzarek, though the gender roles are reversed, as he is married to an Asian woman.
8. "Horse Latitudes", more of a short spoken word piece with eerie sound effects than an actual song, appears on what album?

Morrison claimed to have written "Horse Latitudes" as a child.
9. In the lyrics of "In the Eye of the Sun", The Doors allude to the Chuck Berry song "Too Much Monkey Business" by using the same lyric "running to and fro, hard working at the mill." Name the album.

In 1972, The Doors released a single in the UK called "Get Up and Dance". This single is notable for containing the third non-studio album B-Side the band released, a song called "Tree Trunks". What is notable about this song is that almost no one knows about it. I like the song, which I found on a Doors fansite. Good look finding it since I don't think it was ever released stateside.
Source: Author berenlazarus

This quiz was reviewed by FunTrivia editor ertrum before going online.
Any errors found in FunTrivia content are routinely corrected through our feedback system.
Most Recent Scores
Dec 21 2022 : Guest 96: 9/10
Nov 30 2022 : Guest 12: 10/10 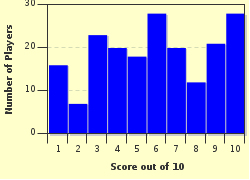