Donna Jean Godchaux provided backup vocals for this hit single before she joined The Grateful Dead. "Suspicious Minds" was Elvis's last number one single in the United States until his death in 1977. Donna meet and married Keith Godchaux in 1970. She contributed vocals to recordings by Otis Redding, Aretha Franklin, New Riders of the Purple Sage, Cher, and The Jerry Garcia Band.
2. Tommy Roe's single "Sweet Pea" hit Number Eight on the Billboard Top 100. In what market did the same single hit Number One?

George Benson's hit recording of "On Broadway" came from the 1978 album "Weekend in L.A."

On the original 1963 Drifters recording, Phil Spector plays the guitar solo.
4. According to an interview with the BBC, Paul McCartney revealed one of the four Beatles came up with the line "If we ever get out of here" as one of the lyrics for the 1974 hit "Band On the Run". Which Beatle was it?

Often times during Beatle business meetings George would say "If we ever get out of here", which McCarntey used on "Band on the Run", as it fit perfectly with the theme of escape and liberation that was the central focus of the song.

The Foo Fighters recorded a cover version of the song, and in 2008 David Grohl sand backup vocals on a live performance of the song with Paul McCartney himself.
5. The Rick Astley song "Never Gonna Give You Up" was Astley's first Number One single on the Billboard Top 100 on March 12-19, 1988. What was the Number One single the following week?


Answer: "Man in the Mirror" by Michael Jackson

"Never Gonna Give You Up" was written by the songwriting team Stock Aitken Waterman. This songwriting and producing trio of Mike Stock, Matt Aitken and Pete Waterman proved to be one of the most successful musical partnerships in the music industry, scoring over 100 Top 40 UK hits.
6. In 1983, Stevie Nicks wrote "Stand Back" after hearing what Prince song in her car?

Steve Nicks got inspired from the Prince song "Little Red Corvette" while she was driving in her car. She wrote "Stand Back" that same day and contacted Prince. Prince played keyboards on her recording.
7. What song by Duran Duran brought them back their commercial prowess in the early 1990s after the failed "Liberty" album?

In 1990, Duran Duran released "Liberty". The album was a commercial failure. In 1992, they released "Duran Duran", commonly known among fans as "The Wedding Album" as the cover art features wedding photos of the band's parents.

Capital leaked the "Ordinary World" single in autumn of 1992 to a Florida radio station, where it became a big hit. Capital released the single in December. The single was so popular that Capital began releasing older Duran Duran tracks as B-sides in order to lure new Duran Duran fans into their older catalog.

After "Ordinary World", the band released "Come Undone", a song not originally included on "The Wedding Album" but which was shoehorned in as a last minute addition. "Come Undone" was Duran Duran's twenty fourth single and their second Top Ten single from "The Wedding Album".
8. What song by Soul Asylum hit Number Five in the Billboard Top 100 and won the 1994 Grammy for the best rock song in 1994?

"Runaway Train" was Soul Asylum's biggest hit of the 1990s. They had a second single that broke the Top Twenty called "Misery".

The song comes from the album "Grave Dancers Union". During the album sessions, Michael Beinhorn, the band's producer, replaced original drummer Grant Young with Sterling Campbell. Sterling Campbell played drums on the original recording of "Runaway Train", though original drummer Grant Young did play the song in concert with the band.
9. In 2004, No Doubt recorded a cover of the Talk Talk song "It's My Life" for their greatest hits album "The Singles 1992-2003". The band originally contemplated recording what INXS song for that same album?

In 2003 the band decided to come up with a new single in promotion for the Singles compilation. As they were on hiatus, the band decided not to record new material but rather do a cover. The band narrowed their choice down to "It's My Life" by Talk Talk and "Don't Change" by INXS, ultimately choosing the Talk Talk single.
10. Although released in 2005, "Hey There Delilah" from the Plain White T's would wait over two years before becoming a massive Billboard Top 100 hit, peaking at Number One when the record company re-released the track as a single. What album was the 2007 single supporting?

The band originally wrote and recorded "Hey There Delilah" for their 2005 album "All That We Needed". In 2007, the band released "Every Second Counts". The album peaked at Number Three on the Billboard Top 200 largely due to the strength of the ""Hey There Delilah" which was not on the regular editions of the album. Deluxe versions of ""Every Second Counts" did feature the song as a bonus cut.
Source: Author berenlazarus 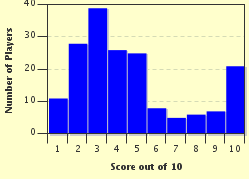