The House of Tudor: Bosworth to 1500 Quiz

This quiz covers the first fifteen peril fraught years that Henry VII spent on the throne of England: the battles, the pretenders, the intrigues, and more.

Quiz Answer Key and Fun Facts
1. On 7 August 1485, Henry and Jasper Tudor arrived on the Welsh coastline, preparing to land. They dropped anchor at the spot called Aberdaugleddau by the Welsh. What do the English call it?

Shakespeare mentions Milford Haven in his play Cymbeline: "...how far it is to this same blessed Milford: and by the way, tell me how Wales was made so happy as to inherit such a haven ..."
2. After eleven days' hard trek across Wales and England, Henry and Jasper arrived at Bosworth Field for Henry's first and most important battle. Once Richard III spied Henry, he seemed infuriated by the Welshman. He pursued Henry like a berserker, struck the red dragon banner from the standard bearer's hands, killing him almost instantly. This standard bearer was William Brandon. He would be remembered as the great-grandfather of which short-lived queen?

William Brandon was the father of Charles Brandon, Duke of Suffolk, who married Mary Tudor, Henry VII's youngest daughter. Their daughter, Frances Grey, Marchioness of Dorset, was the mother of the ill fated Queen Jane.
3. Richard III continued to fight valiantly, as one witness put it,"making way with weapon on every side." Now was indeed the time for dramatic intervention on Henry's behalf. Intervention did arrive in the form of Henry's step-father along with fresh troops. Who was this heaven-sent supporter?

Lady Margaret Beaufort, Countess of Richmond married Thomas, Lord Stanley some time after the death of her second husband, Henry Stafford. Lord Stanley was created Earl of Derby by his grateful step-son Henry VII after the Battle of Bosworth Field.
4. It took twelve days for Henry to reach London from Bosworth. Along the way, he received the adulation of his people. On 3 September, he entered the city to make preparations for his coronation. In which London church was Henry crowned on 30 October?

Westminster Abbey has a very long history. William the Conqueror was the first king to be crowned in the Abbey and all monarchs have been crowned there ever since.
5. There remained several issues that Henry was required to deal with. One of these was his legal status. Despite the fact that Henry was now an anointed and crowned king, he was also something else. What legal stain did Henry now have to deal with?


Answer: He was still legally a traitor.

Henry had been declared a traitor by Richard III, and this royal decree was still technically in force. Henry solved the situation by passing a brief Act for the Confirmation of Henry VII.
6. Henry's marriage provided the ultimate opportunity to bind up old wounds and to unite the warring factions. Whom did Henry marry in January 1486?

Henry planned his marriage to Elizabeth, daughter of King Edward IV, in order to unite the two houses of Lancaster and York. Elizabeth herself did a great deal of undercover work in the months prior to Henry's victory. Much of what we know of this period in her life comes from the song "The Most Pleasant Ballad of Lady Bessy." It seems to have been written by one Humphrey Brereton, a squire in the service of the Stanley family.

Although there may have been some poetic license taken, many historians have confirmed Elizabeth did play a significant role in the events leading up to Bosworth.
7. After the birth of Henry and Elizabeth's first child, the sense of peace of England's new royal family was upset by the curious affair of Lambert Simnel. Simnel was a pretender of sorts. Who exactly did he pretend to be?

Lambert Simnel was the son of an organ maker from Oxford who visited Dublin in May 1487. While there, he passed himself off as the Earl of Warwick, nephew of Edward IV, and a legitimate claimant to the throne. He was enthusiastically encouraged by the Irish, who crowned him King Edward VI in Christ Church using a diadem borrowed from a nearby statue of the Blessed Virgin. Simnel was later captured and given a job in the royal kitchens.
8. Over the next thirteen years Elizabeth gives birth to five more children. Only four of them survived beyond childhood. Who were they?

Arthur was born in 1486, surviving until 1502, after having married Katherine of Aragon. Prince Henry became Henry VIII who died in 1547. Princess Margaret married James IV of Scotland and died in 1541. The Princess Mary Tudor married King Louis XII of France and then Charles Brandon, Duke of Suffolk (the son of Henry VII's standard bearer, who died at Bosworth).
9. Just when it began to look as if everything was going Henry's way, another pretender appeared on the scene. This one proved to be a bit more unsettling for the Tudors. What was this second pretender's name?

Perkin Warbeck was the son of Jews living in Tournai. He pretended to be the younger of the two princes in the Tower, Richard, Duke of York.
10. The last pretender gathered support in the north, living for some time at the court of James IV in Scotland. After James sent him packing south, he was captured near Beaulieu in October 1497. The Earl of Warwick, the last male in the Plantagenet line was caught up in a conspiracy with the pretender, and Henry had him executed on Tower Hill. Where did Henry have his last real rival buried? 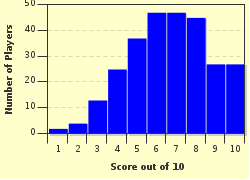 
Other Destinations
Explore Other Quizzes by gimmel33