Try this quiz on the Tudors, some familiar, some less so...

Quiz Answer Key and Fun Facts
1. Henry VII Tudor was a great-grandson of King Charles VI of France by way of his paternal grandmother. Who was this French princess?

She was 13 and never had any more children.
5. Henry VII was supported by his paternal uncle against Richard III. What was the name of this Tudor uncle?

Jasper Tudor, Earl of Pembroke.
6. What was the relationship between James V of Scotland, Edward VI of England and Lady Frances Brandon?

They are the children of Margaret Tudor, Henry VIII, and Mary Tudor respectively.
7. Which title was NOT held by Mary Tudor (daughter of Henry VII and Elizabeth of York)?

Eleanor Brandon married Henry Clifford, Earl of Cumberland and had issue. The Dukes of Marlborough can claim descent from Eleanor Brandon.
9. Who was NOT in the line of the succession at the death of Henry VIII?

Arabella Stuart, although a descendant of Margaret Tudor, was not born until later.
10. This wife of Henry VIII lived in comfortable retirement in England and was often present at court as "the king's dearest sister". Who was she?

Anne of Cleves lived in retirement after her divorce from Henry VIII.
She was often present at court and rode in Mary I Tudor's coronation procession.
Source: Author atreidesman 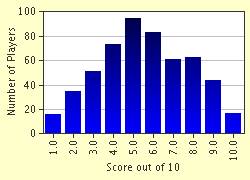 
Other Destinations
Explore Other Quizzes by atreidesman