This is a quiz on those fascinating Tudors. Can you get them?

Quiz Answer Key and Fun Facts
1. The Tudor dynasty had six monarchs, Jane Grey, Henry VIII, Edward VI, Elizabeth I, Henry VII, and Mary I. What is the correct sequence of reigns?

The Tudor Dynasty began in 1485 with the succession/triumph of Henry Tudor (Henry VII). Henry Tudor wasn't next in line for the throne: there were many other Yorks out there (including his future wife) who had a stronger claim to the throne than him, but he was well liked by many people.

Henry married Elizabeth of York and they had eight children, four whom survived infancy. By 1501 Henry VII had his son Arthur married to Catalina de Aragon (Katherine of Aragon), but in 1502 Arthur died, and Catalina was widowed, Elizabeth of York died in 1503 attempting to strengthen the succession to the throne.

In 1509 Henry VII died leaving his throne to his last remaing son Henry (Henry VIII), Henry married Catalinaa de Aragon and in 1516 their only surviving child, Mary (Mary I), was born.

In 1533 Henry VIII anulled his marriage to Catalina de Aragon and married Anne Boleyn, that year Anne and Henry had their only surviving child, Elizabeth (Elizabeth I), in 1536 Henry VIII had Anne Boleyn beheaded and later that year he married Jane Seymour.

In 1537 Jane Seymour delivered Henry and Jane's only child, Edward (Edward VI). In the span of ten years Henry would have three more wives, but no more children, in 1540 he annulled his marriage to the 'Flanders Mare' (Anne of Cleves) then in 1540 he married Kathryn Howard and two short years later she went to the block. In 1543 he married Catherine Parr, twice widowed. In 1547 Henry died, he left his throne to his nine year old son, Edward. Edward's reign was very turbulent. It involved him sending both of his uncles to the block, in 1553 it was very evident that he was dying, so John Dudley Duke of Northumberland devised a plan that involved making himself the father of the king of England. In 1553 Edward died, and through John Dudley's plan Jane Grey (who was married to John's son, Guilford) was made the Queen of England, Ireland, and France, nine days later she was thrown in to the Tower of London and Mary was proclaimed Queen, about six or seven months later she was beheaded. Mary died in 1558 leaving the throne to England, not only to her sister, but to her enemy, in 1603 Elizabeth died after an incredible reign and the Tudor dynasty ended. James VI of Scotland (James I) gained the throne and begain the Stuart dynasty in England.
2. I have already joined myself in marriage to a husband, namely _____________ (This is a quote by Elizabeth I herself.) Namely what?


Answer: the kingdom of England

Elizabeth never married. With a father who couldn't take marriage seriously you would have thought she would have at least married once. But at age eight it was said that she told her childhood friend, Robert Dudley, that she was never going to marry, and as she got older she did what her sister had planned, said that she was married to England.

Some historians believe that Elizabeth had plans to marry her childhood friend, Robert Dudley, but the mysterious death of Robert's wife, Amy, forever prevented a marriage between the two.
3. Anne Boleyn's date of birth is what?

Anne Boleyn affected English history so much. She indirectly triggered the creation of the Anglican Church, and gave England one of its best rulers, yet no one is for sure about her date or year of birth. Many speculate about various date but no one knows.
4. After Henry VIII's death Catherine Parr married once more, Thomas Seymour. Although Seymour was a bad husband, Catherine and Thomas had one child. What was this child's name?

Catherine Parr had a child, yet not much is known of her life. Her biggest claim to fame is her interesting parents, one died after childbirth with her and the other was executed. Mary disappeared from historical records in 1550, when she was two years old. No one knows what year she died, or if she made it to adulthood.
5. In what church is Jane Grey buried?

St. Peter ad Vincula is in the Tower of London and is also the burial place of not only Jane Grey but Anne Boleyn, Kathryn Howard, Saint Thomas More, Saint John Fisher, and others.
6. John Aylmer was a tutor to a young girl from the age twelve. But who was the girl?

Jane welcomed her tutor and spoke of him in glowing terms. Jane even thouight and said that he was the complete opposite of her strict and mean parents. Some scholars believe, on the basis of correspondence between the two, that he fell in love with her while teaching her.
7. Elizabeth is known as many things, which of these is she NOT?

Elizabeth was known as Gloriana, Good Queen Bess, and The Faerie Queen as high praise of her reign, not Mother England.
8. Jane Grey became Queen of England between the death of Edward VI and the proclamation of Mary I as queen. How many days were there between the two events?

There were thirteen days from Edward's death on July 6, 1553, to Mary's assumption of the throne on July 19, 1553. At what point Lady Jane Grey was proclaimed queen is debated, although she is commonly known as the "nine day queen" due to the belief that her reign began on July 10.
9. Mary I was born February 18, 1516 - a Monday, and the following Thursday, she was baptized. Who was her godfather?

Thomas Cardinal Wolsey's meteroric rise had already made him a highly trusted member of Henry VIII's administation. His fall was to be even faster.
10. "This girl never cries." Which girl with Tudor blood "never cried."

Henry VIII loved his first daughter in her younger years. At times, he would boast that "This girl never cries."
Source: Author SilverDrama 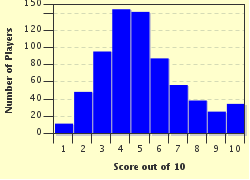 
Other Destinations
Explore Other Quizzes by SilverDrama