An all multiple choice quiz about baseball for those who are still learning baseball like me. I have no idea what I'm doing. I hope that you enjoy it though. :)

Quiz Answer Key and Fun Facts
1. Which team moved and became the Washington Nationals in 2005?

The Expos began their franchise as an expansion team in 1969. Frank Robinson was at the helm when the team moved. The Nationals won 14 more games in their first season compared to 2004 in Montreal. In 2007, Manny Acta took over the managerial duties, then was replaced by Jim Riggleman in 2010.
2. The New York Yankees defeated the Philadelphia Phillies in the 2009 World Series, four games to two. Who was the series MVP?

Matsui batted .615 along with three home runs in the Yankee victory. After the season, the Yankees let this very consistent player go to free agency. He signed with the Angels for the 2010 season, and picked up where he left off in New York. The others listed had all died before 2009.
3. Which of the following players did not play for just one team throughout their entire Major League career?

Cal was a 21-season career Baltimore Oriole and broke Lou Gehrig's consecutive game playing streak. Johnson was a 21-season well-documented Washington Senator pitcher, throwing three Triple Crowns and winning two MVP awards. Koufax was a Dodger for only 12 seasons while winning the MVP Award, Cy Young awards, and throwing a Triple Crown three times in his career. Perry played for nine teams from 1962-1983. Gaylord was the first pitcher to win the Cy Young Award in both leagues.

He did it with the Indians of the American League in 1972, then another with the Padres in 1978. All four players are members of the Hall of Fame.
4. Which of these baseball greats was banned from baseball for his participation in the 1919 Black Sox Scandal?

Jackson, pitcher Eddie Cicotte, and other Chicago White Sox players were banned by baseball after the 1919 World Series was found to be rigged with betting. The Cincinnati Reds won that World Series. Jackson was banned at age 30, and left baseball with a .356 career average after only 13 seasons.
5. Looking at season home run records, Charley Jones of the Boston Red Caps in 1879 set a new season home run record by hitting nine home runs. From there it was Harry Stovey to Ned Williamson to Babe Ruth. Ruth hit 60 home runs in 1927, breaking his own record of 59. Roger Maris broke Ruth's record in 1961 with his own 61 home runs for the Yankees. Who broke Maris' season home run record?

Maris' record stood until 1998 when Mark McGwire of the Cardinals hit 70 home runs in the season. Sammy Sosa also surpassed Maris' record with 66, but McGwire was first to break the mark. Amongst all types of performance-enhancing chemical allegations and theories, McGwire retired with 583 career home runs and Sosa retired with 609.
6. Major League Baseball's Cy Young Award began in 1956. Don Newcombe of the Brooklyn Dodgers won the very first award. Who was the next pitcher to win the award?

The other pitchers died at least 50 years earlier. Spahn spent 19 of his 21 seasons with the Braves. Winning the Cy Young Award in 1957, this tremendous left-handed pitcher was a 20-game winner an amazing 13 times in his career. He retired with 363 wins, then was voted into the Hall of Fame in 1973. He died in 2003 in Broken Arrow, Oklahoma.
7. Which pitcher won 31 games for the Detroit Tigers in 1968, then was later banned from baseball for having gambling and drug issues?

In 1968, McLain won the Cy Young and MVP awards to help the Tigers go all the way to the World Series. They defeated the Cardinals in seven games. McLain's career went downhill in 1970 due to his off-field ventures. He went 10-22 with the Senators in 1971, and was out of baseball by the end of 1972. He later spent some time in prison.
8. Which future Hall of Fame manager took over for ailing Dodger manager Walter Alston with four games left in the 1976 season, then managed the team for the next 20 seasons?

The other managing greats all died prior to 1976. Lasorda took over after Alston had the reins of the Dodgers for more than 20 seasons himself. Lasorda had been the Dodger third base coach for many seasons prior. Tom took the Dodgers to five NL pennants while winning three World Series. He was Manager of the Year in 1983 and 1988.
9. How many total teams were there in Major League Baseball in 2010?

The others listed not only hit 500, but all hit over 600 big ones. DiMaggio was a career Yankee of only 13 seasons, retiring in 1951. He hit 361 home runs and averaged 28 per season.
Source: Author Nightmare 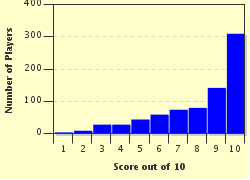