This quiz is about the very versatile poodle, good luck and have fun!

Quiz Answer Key and Fun Facts
1. What are the 3 sizes of poodles in the US?

The standard was the first type of poodle, and the other two sizes came off of it.
2. Which of these is an activity a Standard Poodle can NOT do?

As the title said, the poodle is a very versatile breed. Some of the activities that they can do are hunting, agility, conformation, obedience, search and rescue, therapy, skijoring(when a large dog pulls their owner who is on skis, but the dog can't do all of the work), and tracking.
3. What is the most common clip seen in the show ring?

The English Saddle and Continental are the only clips allowed in the show ring (although poodles under 12 months may be shown in the puppy clip). But the Continental is the most popular clip.
4. What was the Standard Poodle's original purpose?

Many people do not know this, but they were bred for hunting- not to be a lap dog or a circus dog which most people think they were.
5. Which of these was the Standard Poodle also bred for?

The Standard poodle was also bred to guard, which most people do not know. They are like a "hidden" protection breed.
6. Where did the poodle originate?

There is no such thing as a "French Poodle". They may be the national dog of France, but they actually originated in Germany.
7. What color of poodle is rarely seen in the show ring?

There are only 3 red poodle champions, to date(Oct 2002), in the US, while there are many Black, Brown and White champions.
8. What is the "topknot"?


Answer: The hair on the head, from stop to occiput.

The topknot is the only place on a poodle where elastic bands my be used.
9. What is the purpose of the Continental Clip?


Answer: The puffs on the hips, chest, and ankles, were meant to keep the major organs warm in cold water.

The poodle was bred to hunt in cold water so they needed something to keep them warm. First hunters tried not shaving any hair and leaving it all over the dog's body, but that made him/her sink. So they got the idea to leave hair on the body over important places like the liver, kidneys, heart, lungs, and joints, and shave the rest of the hair off.

They also left a puff of hair on their tail so the hunter could see the dog if he/she went under water.
10. What should a Standard Poodle breeder test their dogs for? 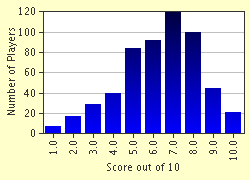 
Other Destinations
Explore Other Quizzes by PoodlePerson