Jim Morrison was a superstar in the late 1960s, famous for being the lead signer of the band the Doors. He wrote brilliant poetry from which he crafted his songs. Jim Morrison was also quite enigmatic, and after much rebellion and drug excess, he died.

Quiz Answer Key and Fun Facts
1. Jim Morrison was born on December 8, 1943; what city was he born in?

Jim's family often moved because his father was in the military. His sister was born in Albuquerque and his brother in Los Altos. Jim graduated from high school in Alexandria.
2. What branch of the military was Jim's father in?

George Stephen Morrison became a Rear Admiral in the US Navy. He was commander of the U.S. Naval Forces in the Gulf of Tonkin during the Gulf of Tonkin Incident of August 1964. It was that Incident that got US forces embroiled in the Viet Nam war.
3. Why did Jim Morrison move to Los Angeles, California in 1964?

Jim graduated with an undergraduate degree from UCLA's film school and the Theater Arts department of the College of Fine Arts in 1965.
4. With whom did Jim Morrison come up with the idea for the Doors?

Ray Manzerak first met Jim Morrison while they were both film students at UCLA. In 1965, by complete chance they encountered each other on the beach. The two engaged in a friendly conversation; Jim told Ray that he had written some songs. Ray asked Jim to sing one of the songs; so, Jim sang "Moonlight Drive." Immediately, Ray knew that he could provide the organ music for those lyrics.

Ray then met Robbie and John (the Doors' guitarist and drummer) at a Transcendental Meditation lecture. Paul Rothschild became the Doors' producer long after the band was created and named.
5. Jim Morrison named his band partly based on whose writing?

William Blake wrote at the end of the 18th century: "When the doors of perception are cleansed, man will see things as they truly are, infinite."

In the 1950s, a respected author named Aldous Huxley wrote an essay about his experience using the psychedelic drug Mescaline called "The Doors of Perception."

It is from these two sources that Jim Morrison named his band. The other names listed all served as inspirations to his songs and poems.
6. The first club that Jim Morrison was hired to perform at with the Doors was called the Whiskey A Go Go.

Actually, the first place that the Doors were hired to perform at was called the London Fog.

The London Fog was little more than a dive bar; but it allowed the Doors to have valuable time together developing so that they could move on to bigger and better things.
7. Before he began signing for the Doors, Jim Morrison spent a few months living on the flat roof top of a building. In what city was this roof top?

It was during this time on the roof top, that Jim began to think of lyrics to songs.
8. In what city was Jim Morrison arrested on stage?

Jim had been accidentally sprayed with mace by a confused police officer, right before the New Haven concert, who did not realize that Jim was the Doors' lead signer. In the middle of his performance, a furious Morrison told the audience what had happened and began to taunt the police. Without hesitation the police walked on stage and arrested him.

Jim also got in trouble for his behavior during the Miami concert; but, was not formally arrested until well after the show to face much more serious charges.

Clips from both the Philadelphia and New York concerts appear on the Doors' "Absolutely Live" album; however, he was arrested at neither of these large venues.
9. As the lead signer of the Doors, Jim Morrison sang two number one hits on the US charts. What are the names of these two songs?

All of the other songs listed did very well on the charts, but none of them made number one in the US.
10. Sadly, while spending time with his girlfriend Pamela Courson in Paris, France, Jim Morrison died on July 3, 1971, under very mysterious circumstances. What sickness did Jim suffer from that most certainly contributed to his early and untimely death at age 27?

Jim Morrison was known to be both a brilliant and sensitive man. Unfortunately, because of his constant drinking, most people only got to see his dark side. Many other great writers and artists have also suffered from the same disease that Jim had.

Please pray that a medical cure for alcoholism will be found soon.
Source: Author star_gazer 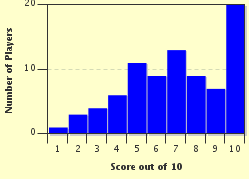